In 2015 space.com published an intriguing article titled, “‘Trillion Dollar Asteroid’ Zooms by as Earth Scientists Watch”. The exact dollar value of the asteroid is a little hard to determine but it is probably closer to $5 trillion dollars!

The reason for the high price point of this particular asteroid is due to its high concentration of platinum group metals. Today large platinum deposits are mined mostly in Central Africa – but this could all change in the coming decades. Platinum is a metal worth just less than gold and it is useful over a range of different technologies including industrial chemical processes, manufacturing techniques and is often found in high-capacity computer chips. 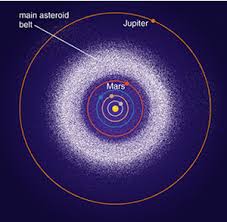 The ‘trillion dollar asteroid’ – aka 2011 UW158 – is still orbiting the sun, but it isn’t the only one out there… In fact millions of tons of asteroidal material in our solar system is said to be worth a similar amount. With a total mass of all asteroids containing about the same mass as our Moon! No wonder the dinosaurs went extinct… The Solar System is simply brimming with these things!!

The first companies to successfully mine and sell the metal found in these asteroids, will quickly become the richest companies in the world.

While most people would probably consider the asteroid mining industry far too futuristic for anyone to consider seriously, today there are actually start-up companies who are completely set on developing the necessary technology for such an audacious endeavor. Mining an expensive chunk of rock flying through space could be reality in around 20 years.

Planetary Resources is one such company aimed at turning this abstract idea into reality. Backed by several tech billionaires and stocked full of capable engineers, they are heavily involved in satellite experiments and relevant asteroid research.

However, this company is not aimed at just mining asteroids – they are thinking even bigger…

All of the excitement over the future of asteroid-mining has brought to light a fundamental struggle which rocket scientists are constantly battling: lack of fuel in space.

To illustrate why fuel in space-travel is such a massive problem, imagine that you are driving from LA to NewYork and there are no gas stations … You’d have to bring all your future fuel with with you from the start.

Going to a distant star or moving space-mining equipment around the solar system will require a lot of rocket propellant – a difficult task if you must bring it all with you from day 1.

If humans really wish to go forth and conquer the stars then we’re going to have to solve some difficult problems. One of these problems is the problem of fuel because firing a rocket from the surface of earth requires a lot of work. Earths gravity makes things difficult – gravity is strongest on the surface and it gets weaker as the rocket gets higher. This means that the more food, water and space gear you bring with you, the more difficult it becomes to get off the ground. And the more stuff you bring, the more propellant you need and the more propellant you need the heavier you are so you need even more propellant! A classic issue of exponentials.

If you have a larger, heavier rocket to carry your extra fuel, then you must also have more thrust from your engines to even get off the ground… and you sill need to bring fuel for the remainder of the journey. Every extra kilogram of fuel means a stronger engine, more fuel and an even bigger rocket!

Planetary Resources is geared toward solving the fuel issue: They intend to make the first gas stations in space.

How do you make a gas station in space?  Water

There are some select asteroids that contain large amounts of water ice. The idea being, that if the water can be cleaned and electrolyzed (splitting H2O into H2 & O2), then we could burn the H2 & O2 back together to generate rocket thrust. On earth this technique of combustion is already quite popular (SpaceX rockets already use this method).

Planetary Resources likes to make the analogy that asteroid mining will closely resemble the gold rush of the 1800s.

In the gold rush era, there were many people who struck gold and became rich—but, even more people struck dirt and went home with empty pockets.

The only people guaranteed to make money in the gold rush were the ones who sold shovels.

By manufacturing rocket fuel away from the surface of the earth, Planetary Resources would help make space travel more accessible by allowing large rockets to travel further than they ever could before.

As the next few decades reveal themselves, keep an eye on the sky – you might just witness the birth of an exciting new economy.